As Chinese, our weddings are steeped in traditions and symbolism. From the engagement ceremony to the wedding banquet, each step of the way often involves a number of rituals that are believed to bring good luck to the couple and their families.

Guo Da Li (过大礼), also known as the Chinese betrothal ceremony, usually takes place between two to four weeks before the wedding. This ceremony is usually held on an auspicious date based on the bride’s and groom’s Ba Zi (八字).

During the ceremony, the following individuals ought to be present:

The betrothal gifts given during Guo Da Li are usually items of symbolic value. The items to gift within the four dialect groups—Cantonese, Hokkien, Teochew and Hakka—differ. Perhaps the most well-known Guo Da Li gift is Si Dian Jin (四点金). This cherished present is usually a 4-piece 916 gold or 999 gold jewellery set for the bride containing a gold necklace, bangle, ring, and a pair of earrings.

This Si Dian Jin gift carries a figurative meaning of providing a roof for the bride, taken from its Chinese translation “four points of gold” (the four corners of a traditional rooftop). The necklace represents the linking of the two families; the bangle signifies working hand-in-hand in marriage; the ring represents the couple’s love, and the pair of earrings signifies the harmonious union between the bride and groom. 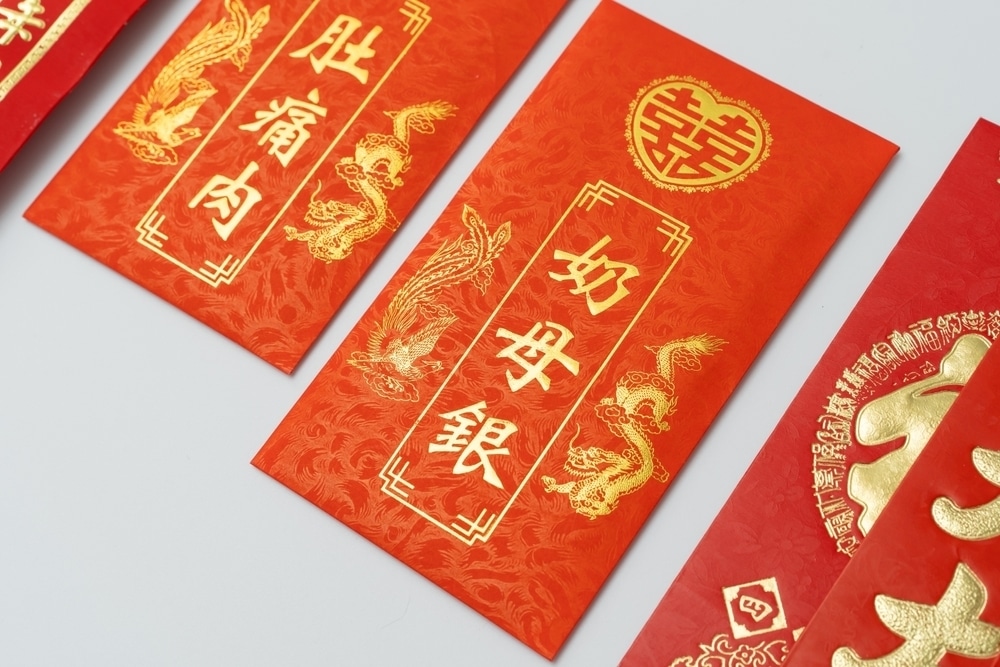 The groom’s family has to prepare two sets of red packets for the bride’s family— Pin Jin (聘金) and diaper money.

The Pin Jin refers to the bride price, with amounts ranging from $1,888 to $8,888 placed inside an extra-large red packet. It’s better to give a Pin Jin of four digits (thousands), as daughters are also referred to as Qian Jin (千金). A small sum from the Pin Jin will subsequently be returned back to the groom during the Hui Li (回礼) ceremony.

Meanwhile, the diaper money is given to the bride’s mother as a token of appreciation for raising her. Depending on the bride’s dialect, the groom will have to prepare either a platter of roast pork for his bride’s  Cantonese/Hakka family or minimally six cans of pig trotters for his bride’s Hokkien/Teochew family. This gift is meant for the groom’s mother-in-law. This brightly-coloured fruit is seen as a symbol of good luck and prosperity for centuries. The fruit’s name in Mandarin Chinese, kam, sounds similar to the word for “gold”, and its colour is associated with wealth as well. Typically, a box of eight mandarin oranges will be gifted to bring good fortune into the couple’s life. These traditional wedding cakes, also known as Xi Bing (喜饼), will be distributed by the bride’s family to their family and relatives. The type of pastries to prepare will depend on both families’ preferences. Two pairs of dragon and phoenix wedding candles are also prepared during the Guo Da Li ceremony. The dragon represents power and wealth for the groom, while the phoenix signifies grace and rebirth for the bride. Together, both candles symbolise a blissful matrimony between the couple.

In Chinese culture, the colour red is associated with happiness and prosperity. This red door banner will eventually be hung on the couple’s main house door to bring in good luck and fortune. Double happiness stickers are a traditional Chinese decoration used to mark special occasions. The symbol is derived from an ancient Chinese character that represents good fortune. The character is composed of two parts, each of which represents one half of the Chinese word for happiness. When the two halves are combined, they form the character for double happiness.

These stickers will be pasted on the various Guo Da Li gifts like the hard liquor/wine, roasted suckling pig/pig trotters cans, and mandarin oranges. Though not essential for many modern couples today, Guo Da Li and other traditional wedding rituals do still have a place in today’s society. Having been passed down for generations, they help us to connect with our heritage and honour the traditions of our ancestors.

Over here at SK Jewellery, we’re the leading provider of bridal jewellery, including engagement rings, wedding rings, Si Dian Jin, and wedding gifts in both 916 gold and pure 999 gold. Let us help you elevate your betrothal ceremony now! Feel free to book a complimentary visit to consult our staff at any of our stores.

DO YOU WANT TO SAVE YOUR CURRENT DESIGN?

discard save
Cancel
Add to cart

You have to select pendant.